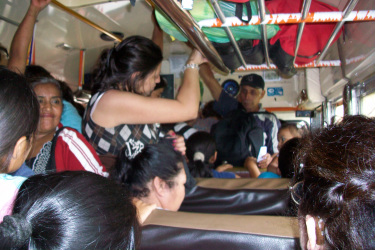 Excerpts from my Essays
If you like these excerpts, spread the word.

When visiting a third world country like Nicaragua riding the local “Chicken” buses is an experience not to be missed. Now we’re not talking about the lovely air conditioned cushion seated buses that travel the Pan American highway from country to country.

I rode the Nicaraguan buses with a friend and fellow teacher, Carolyn, this past summer. Being teachers makes it easy for us to give into our penchant for wandering, and a great way to learn about new cultures. Buses, in general, are a way to meet people and understand the lives of the locals.

Carolyn embraced the “Chicken” bus experience with enthusiasm. She actually spent one bus ride feeding and petting a hen in a sack with its head sticking out. I convinced the young fellow who owned the chicken to tell my vegetarian friend that the chicken was going home to lay eggs and wasn’t for cena – dinner.

Not many people in Nicaragua have access to cars, so the buses are their only means of transport on highways that are more often frequented by cattle than motor vehicles. Unless they are on a steep hill Nicaraguan buses will stop and pick up anyone and almost anything – lumber, sheet metal, bales of tobacco, sacks of grain, stalks of bananas, small critters, and large baskets of unidentifiable baked goods. I never saw anyone turned away no matter how crowded the bus might be.

The most traveled roads are asphalt or laid brick, that is where they haven’t washed out during the rainy season, locally called winter (June through October). One guidebook mentioned that a lot of the so called roads were a joke, but in the rainy season, when I traveled, they were actually “no joke”.

In the cloud shrouded mountains in the north of Nicaragua the view over each hill is more breathtaking than the last. One can only hope that the old Bluebird’s brakes and gears are up to the steep grades. There is no such thing as a run-away ramp in this impoverished country, although I imagine the  lovely stacked stone walls would stop a brakeless bus fairly efficiently.

Each bus is personalized by its regular driver and his helpers. Some have only a few stickers in the front showing horses or pictures of kids and family. Often cartoon characters festoon the length of the bus.  Tiny religious statues are pretty standard. I’ve seen drivers in this predominantly Catholic country cross themselves before the bus left the station. I was never sure if this boded good or ill for the up-coming ride.

There are surprisingly few accidents given the predominance of livestock, horsemen, oxcarts, children, dogs, and donkeys with a death wish wandering freely along the winding roads.

One day, near the city of Somoto near the border of Hondouras, I walked along a major highway for over eight miles (because the views were amazing). The only dead animals I saw were butterflies and one tiny bat. During the walk buzzards circled hopefully overhead in search of a tourist meal.  They had me a bit concerned, but they flew off when I kept moving.

The lack of dead animals could be attributed to the skill of the drivers. However, another possibility is that the poverty in the country and general lack of meat in most households makes any road kill an opportunity for more than the buzzards.  ~

When I was little, my parents told me I could be anything I wanted. At different times, I had talked about being a Doctor, a Horse Rancher, a Firewoman, and since it was the sixties so Astronaut was on the list. All my ideas were met with encouragement and discussions about the effort that would be needed to make the career possible. “You can do anything, if you want it badly enough and are willing to work for it,” was my parent’s mantra.

Then, in the late sixties when I was ten, my Dad took me to see the Harlem Globetrotters. It was a cold winter evening, a bit of snow was falling as we entered the old Sports Arena near the river in Toledo, Ohio. I
loved the smell of popcorn and hotdogs, the warmth and bustle of the crowd.

When the Globetrotters came on the court, the enthusiasm of the players and their skill with the ball had me enthralled from the first minute. The tune Sweet Georgia Brown that played while the team was warming up got my heart racing. I wanted to know who Georgia was, because she had made these guys so happy in their work. They were having so much fun.

Their energy was infectious. I bounced in my seat. The Globetrotters worked as a team passing the ball down the court. Some of the shots they made were like magic. I don’t remember the name of the team that lost to the Globetrotters that night, but they tried hard.

The skill of the Trotters was undeniable. I cheered for the Trotters, because they were just so good spinning around and passing the ball without looking, making shots jumping high, sliding between the legs of the  point guard. Some of them even made baskets by throwing the ball backwards over their head. Meadowlark Lemon became my instant hero when he made a backwards shot from half court.

The crowd screamed encouragement, but the local team was outmatched with a grace and style that kept the crowd from being upset that their hometown boys were beat. By the end of the game, there were a lot more
people cheering for the Globetrotters.

On the way out of the Arena Dad let me ride piggyback so as not to lose me in the rowdy crowd. It was so great to see everyone so happy. I decided right then and there what I wanted to be when I grew up. I wanted to be a Harlem Globetrotter. I wanted to do magic with a basketball and make people happy.

On the way to the car, I explained my new career path to my Dad. He got a funny look on his face. I did not get the usual immediate encouragement.

“Honey, you know that the women in our family don’t get much over five feet tall don’t you?” he said.

“Yeah, Dad, but I’ll practice real hard and learn the shots from way back and how to slide between the tall guys legs.”

He nodded solemnly, “That might work, but you’re not from Harlem.”

“I can move there and live for a while before I join the team,” I replied.

“I didn’t see any girls on the team,” he started.

I knew he was grasping at straws, because we’d had the talk about how traditionally male jobs were becoming available for women everyday. The look I gave him made him realize that line would not work.

“…besides you’re white,” he was not encouraging me at all. This was the first time he had ever thought I wasn’t capable of doing anything I wanted.

I was crushed, my whole world-view changed that night. My epiphany was not about basketball, equal rights for women, or racial equality. I realized for the first time that my Dad didn’t know everything. He wanted to give me a world where I could do or be anything I wanted, but there were things beyond his control.

That cold winter night I grew up a bit. I realized I would have to deal with things in the world that Mom and Dad couldn’t fix. As much as the world was changing, there were boundaries. It is a rough realization for a young kid.

It is 2012, the world has changed, my heartbreak at not being able to be a Harlem Globetrotter is nothing compared to the crushed dreams of many children today. Some things are no longer obstacles, but other problems have replaced them. So many kids are growing up quickly facing huge challenges.

It is almost impossible to dream of a bright future when you are homeless. It is difficult for parents to support a child’s dream if they can’t find work. Middle class parents are having a hard time encouraging their kids to go to college knowing that they could end up hundreds of thousands of dollars in debt.

Yet children still dream, as well they should.   ~