​Skeeter Enright is the pen name of a writer of fact, fantasy, & mystery. 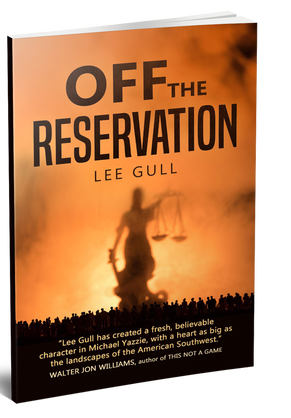 Off the Reservation  by Lee Gull (I know...another pseudonym)
See excerpt on my mystery page.
---Walter Jon Williams, author of This Is Not a Game says…
“Lee Gull has created a fresh, believable character in Michael Yazzie, with a heart as big as the landscapes of the American Southwest."

This story is out as digital at Amazon &  Barnes and Noble available in paperback
From Enigma House Press!!
This story is about a young man walking between two cultures, seeking justice.

When he’s with his family in the Navajo Lands, looking white isn’t a problem for half-Navajo Michael Yazzie. It is why his aunt sends him to the city to look for a missing relative. Arriving in Phoenix, he finds that his cousin is in jail accused of murder. Matters become especially complicated when Michael realizes his cousin’s lawyer is the white father who abandoned him as a child.
To bring his cousin home, Michael has to track the real murderer in an unfamiliar urban wilderness. He is forced to form alliances with the father he doesn't trust, a news reporter he doesn't understand, and a  street person who may have motivations of her own. Together they deal with an over-worked police force and a cunning serial killer.
​ 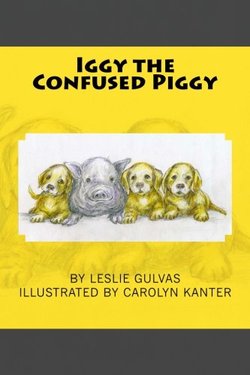 If you have little ones, Iggy the     Confused Piggy is a children's picture    book great for a gift: Find it on -click here --> amazon.
​     ​Iggy doesn't look like his family, but that's okay. His mommy always loves    him in every way. Iggy the piggy is being raised by a dog family. The
youngster has questions about looking different than his brothers and sister.
While comparing colors, shapes, and numbers he finds out that          despite being different than the rest of his family, he is loved          without reservation.
At the end of the story, children can color their own Iggy adventures.
This book is for all the families who share the joy of children who may
not have been born to the parents who love them. It is especially for children   who look or feel different. Iggy was lovingly written and illustrated by
teachers who understand how important being accepted is for a child. 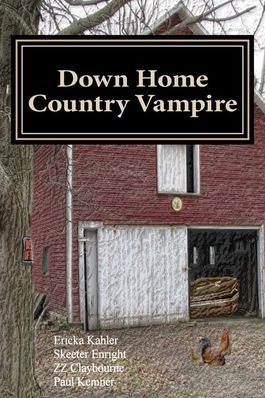 I'm proud to be in this anthology with four excellent authors. find it on Amazon

Not all Vampires are city folk.   Down Home Country Vampires explore how people deal with Vampires in their midst.

A feisty Grandfather helps his son deal with his 'delicate condition' while protecting his grand children.

Can a newcomer accept her neighbor is a pig-farming, moonshinier, vampire?

What happens when a 1940's black couple find themselves in a sundown town?

How does a local farm vet account for the unexplained epidemic of exsanguinated livestock corpses? 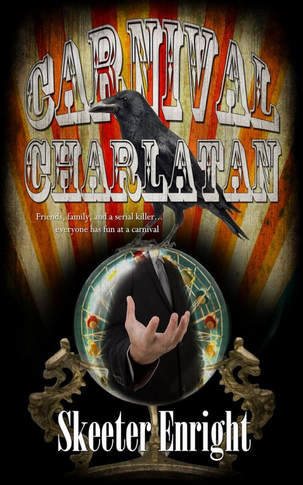 Friend Skeeter Enright on ﻿facebook﻿
﻿Skeeter can be contacted directly at skeeterenright1@gmail.com

____________________________________________________________________
Carnival Charlatan - urban fantasy
was one of Amazon's Editor's Favorite ﻿﻿BEST BOOKS OF 2014
Available through: -contacting me at skeeterenright1@gmail.com
(the publisher hasn't been paying royalties and won't return the rights to me.)
In Carnival Charlatan, twenty-six year old Ariel Land can channel the earth’s energy into raw power, make doorways to other dimensions, has psychic insights, and can throw a spell as well as any witch, yet she hides her abilities under the guise of a carnival Tarot reader.
Magical beings have caused her family nothing but trouble.
Myths and legends come from somewhere. Ariel knows the place, and wants to avoid it.
Ariel’s plan to live a limited magic lifestyle is frustrated when the disappearance of a friend forces her into the same type of supernatural situation that killed her mother. She must choose between loyalty to her Carney friends or her sense of self-preservation.
If that weren’t enough, a serial killer determined to rid the world of witches is stalking her.

Legion of Strangers, is finished and in search of an agent.
A character driven military space opera that takes the French Foreign Legion into space. An excerpt can be found on the Space Opera page of this site.

In the cutthroat twenty-fifth century business landscape of Earth, failure is not an option. To save the family corporation, Beau Aelstrom accepts disgrace and leaves his privileged life to join the Legion of Strangers, the remnants of the French Foreign Legion and the last military force on Earth.

The Legion’s tradition of making meaningless sacrifice a virtue is the ultimate irony for Beau. His only regret is that his twin sister followed him into the Legion. Both he and his sister find that military service offers them freedom and friendships they never knew as corporate functionaries. To completely leave their old life behind, the siblings volunteer for duty on Earth’s colony world.
​
On the journey to the colony, Beau realizes the corporate propaganda he’d accepted all his life, is not the whole truth. Unknown to people on Earth, Colonials live with privation and dangerous working conditions. A mine collapse, mismanaged by the corporation governor, causes the loss of hundreds of Colonist lives. The indifference of the mine administrators sets the stage for an insurrection. During Beau’s trip, rebellion ferments both on the Colony and within Beau.  When the Legion arrives, the ensuing battle tests Beau’s convictions and challenges his sense of honor.

Skeeter was also  interviewed on the awesome author's blog.
Also read a review  of "Carnival Charlatan" by Clif Flynt author of the Sigurd and Bard series "Promises Remembered".

Other stories on line
﻿ Grandpa Deals With the Zombie Apocalypse is not the typical zombie 'eat em up', but a tale of how a feisty octogenarian tries to keep his grandchildren from being emotionally damaged by the appearance of zombies in their rural community. See it  in the August issue of Fictionvale at  http://fictionvale.com/downloads/episode-four.

Flight of Swans is a literary fiction. It is a character study which looks at how a widowed farmer uses observation of the natural world to help him deal with his children leaving. See it at: http://www.indinkmag.com/issues/

Broken Glass a horror story about A bullied high school student who uses magic to exact revenge on his tormentors...but magic exacts a price. See it now in the May issue of Allegory at http://allegoryezine.com./ .

Writing fact, literary fiction and children's stories under her true name: See excerpts on my Essays and literary page.
She has 20 published articles, and a story Answering the Question and Comfort of a King in Chicken  Soup for the Soul anthologies: Miraculous Messages from Heaven and My very Good, Very Bad Cat Did It.

Friend Skeeter Enright on ﻿facebook﻿
﻿Skeeter can be contacted directly at skeeterenright1@gmail.com